Tales from the Cave 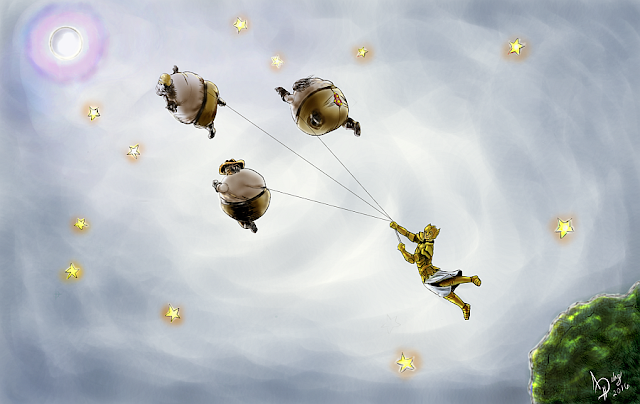 It's probably not your bedtime yet, but nevertheless here is Father Dragon to tell you a story. You know I have dwarves as minions but what you probably don't know is that they like to eat beans as much as they like gummy bears and beer. Personally, I rather have them eat gummy bears all day long instead of beans, because... well, as tasty as beans may be, they are infamous because they are difficult to digest for many people. My dwarves are not the exception and beans also give them gas. This is not only a matter of digestion difficulties, you see? It is not a problem of how smelly my dwarves can get around me. After all I smell to Sulphur No. 5 myself. However, can you imagine what happens if you put a fire dragon in a gas loaded environment?  Anyone can see beans are banned from the dwarves' diet because of Cave's safety - anyone but a stubborn knight.

It was a sunny and clear day (such a good way to start a tale) when it occurred to me the splendid idea to hire a knight for a tech adviser/desk help. As a dragon who was born 805 years ago, I'm not good with technology and dwarves are not much better. As a wealthy magnificent dragon as I am, not cheap at all, I offered said knight a monthly paycheck for an amount with ten zeroes. He agreed and took the job without reading the contract. Probably that was due to the fact that I forgot to give him one but anyway, it was taken for granted the dragon was the boss and the knight should do as the dragon says. He found out the dwarves' weakness for beans and he took joy in feeding them with beans despite being told repeatedly not to, mostly after minor explosions and one or two unlucky beings standing in the wrong place at the wrong time.

I thought the knight in question had stopped his mischief, more so because he wasn't in his office much. One day I noticed I was missing some dwarves and they were nowhere to be found. I also noticed I hadn't seen the knight around in a long while. And then my brilliant mind discovered -by nice interrogation- that the knight kept feeding beans to the dwarves behind my back but the little devils covered him too. They avoided incriminatory explosions by holding the gas in, until it finally happened. They were lighter than air and they took off. I saw my gassy dwarves and the gassy-dwarves kidnapper in golden armor laughing as they flew across the sky. I am not sure how long it will take them to come back but I am sure this is not the first time this sort of flights take place.

If you happen to look up one day and see something strange; it is not a plane, it is not a bird and it is not Superman. It is my former tech adviser knight with my disobedient dwarves having a blast.