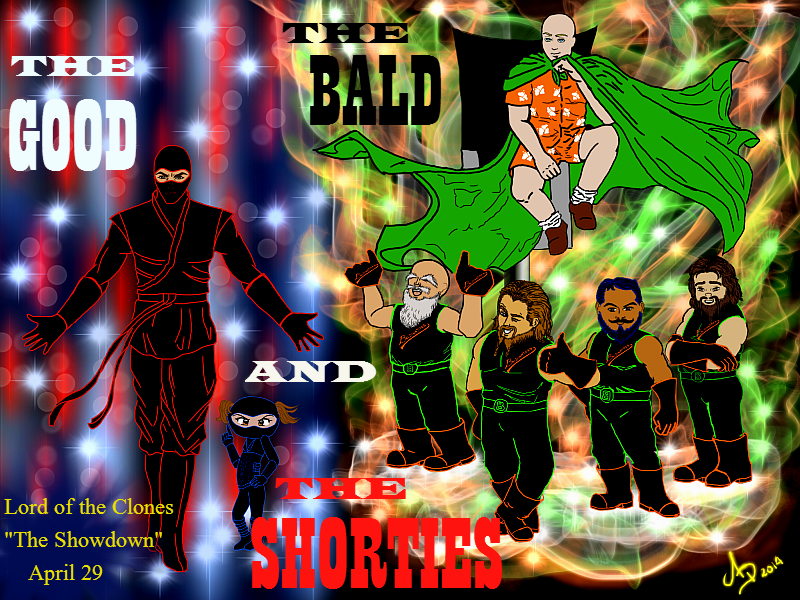 The dwarves like to think the world has been holding their breath, waiting for the next installment of the Lord of the Clones. Don't kill the little guys' dreams and just act like this is the greatest news of all time. They have been working really hard all the month (REALLY HARD) to make the 2 minute show you're going to witness on April 29th. They have even gone on a diet and lost weight to look dashing on that new outfit.

Since making a video requires a lot more sweat than nine panels, the Shorties have decided to split the showdown in two parts. Ninja Army dance first, cheering groups cheer, judges judge and minions and clones bribe, (and dragon eats popcorn in the background). Then in a later installment comes the Baldinators' (name chosen by Lord Baldernot) turn to dazzle you and the judges with their amazing Riverdance and Hawaiian moves.

Now I just want to make it clear that the fact this showdown happens at the Dragon Cave doesn't mean Father Dragon endorses every and any attempt from the Shorties to win said showdown (including but not limited to bribery, cohersion, boicoting, seducing, etc.) I was informed that there will be enough of Jezebel's infamous punch available to expect the unexpected. Dwarves invited Jezebel as guest star for this showdown, so if you have already had tea with Mistress Snark, you know what I'm talking about. If you have not...well...just remember to clap hard and cheer for your favorite team (if you can remember which is your favorite team.)

Since a dwarf-only jury could make the ninjas think their decision is biased, there will be a third judge. He's known to be close friends with the dwarves for a long time but he's also known to be a knight of honor and principles. The one knight of the Order of the Dragon, Sir Jeffrey Hargett. Higher Powers bless his soul and his boldness and every sane bone in his body while he still has them. He'll be missed... I mean, GOOD LUCK to the bravest knight I've ever met! Best luck also to Alex J. Cavanaugh "Ninja Cloner" and Mark Koopmans "Lord Baldernot".

So everything is nearly ready. I leave you now to call my lawyer and make sure the cave insurance is updated and covers for missing limbs and/or clones.

Thanks for pretending you're holding your breath.  It is important for dragons to hold our breath whenever Jezebel's punch is close. You may end up flying in more ways than one.
Publicadas por Al Diaz a la/s 1:21 PM